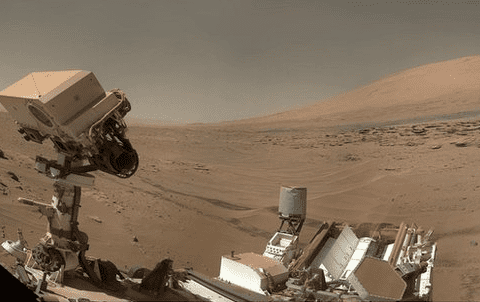 NASA has announced a major discovery by the Curiosity rover; water may have been more plentiful on the planet's surface than previously thought. This could mean that some forms of life existed on Mars millions of years ago.

In a news conference earlier this week, lead scientist John Grotzinger said that observations by the rover on its year-long trek across the Gale Crater indicate that the area was likely dotted with rivers, deltas and even a "great lake" in the distant past. Taking soil samples and detailed photos as it made its way towards Mount Sharp, the rover discovered layered sediments which are a sign that water may have existed on the surface of the dry, dusty red planet many years ago.

“As a science team, Mars is looking very attractive to us as a habitable planet,” Dr. Grotzinger said in an interview. “Not just sections of Gale Crater and not just a handful of locations, but at different times around the globe.”

While scientists continue to evaluate the data coming from the robotic probe, they have also posited that the existence of Mount Sharp, an unusually tall peak on the edge of the Gale Crater, could support their water theory as well. They believe the mountain is the remains of sediments laid down by a series of lakes that filled the deep bowl over millions years. When the water dried up as the planet lost its atmosphere, they believe that winds dug out the crater leaving the massive 3-mile high peak.

"All that driving we did really paid off for science," added Grotzinger, referring to Curiosity's travels. "It didn't just get us to Mount Sharp – it gave us the context to appreciate Mount Sharp."

Next up on the the rover's agenda; climbing Mount Sharp itself. Curiosity has been on Mars more than 2 years so far and NASA has extended its mission indefinitely.