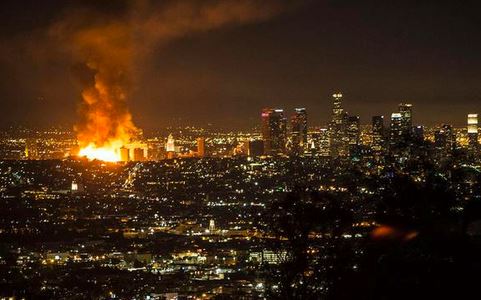 A huge fire in downtown Los Angeles engulfed an apartment building early this morning, forcing the California Highway Patrol to temporarily shut down the 101 freeway.

"This is a historic fire, what we as firefighters would call a career fire. It's huge," Fire Department spokesman David Ortiz told NBC News. "I really can't remember a building fire this big and I have been with the department for 13 years."

The fire, which shut sections of the 110 and 101 freeways, was being fed by wood framing at a planned seven-story, 1.3 million-square-foot luxury apartment complex. Ortiz said he didn't think anyone was living or working there when the fire started.

There were no immediate reports of injuries.

Watch a CNN report on the fire, AFTER THE JUMP…

Previous Post: « This ‘Let It Go’ Christmas Light Display Will Win This Winter’s Internet: VIDEO
Next Post: Hannah and the ‘Girls’ Are Ready for Season 4, Are You? – WATCH »