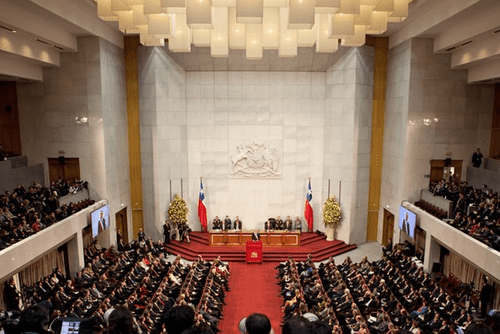 Chilean lawmakers and a LGBT advocacy group, The Movement for Homosexual Integration and Liberation, introduced a bill on Saturday that will extend marriage rights to same-sex couples in Chile reports the Washington Blade. The proposal that was introduced with the help of Congressman Gabriel Silber Romo of the Christian Democratic Party would change the wording of "a man and a woman," to "two people," in Chile’s marriage law. The proposal will also change "husband and wife," to "spouse," and amend the concept of procreation to "raise children." The Liberation advocacy group is hoping to eliminate discrimination and establish equality with the bill.

"With this bill we are looking to eradicate the historic discrimination that affects people simply for loving and living with someone of the same sex. Respect for family diversity is at the heart of this bill that we celebrate with backing throughout the political world and also with the broad support of citizen organizations."

The bill comes after the Chilean Senate voted in favor of legalizing same sex unions in October throughout the country, but members of the Chilean House of Deputies have yet to vote on the proposal.

The origin of the gay marriage bill began in 2012 when the Inter-American Court of Human Rights ruled in favor of lesbian Judge Karen Atala who lost custody of her three daughters to her ex-husband seven years earlier because of her sexual orientation. The Chilean government apologized to Atala, paid her $70,000 and provided medical and psychological care. The Liberation group then filed a lawsuit with the Court of Human Rights on behalf of three gay couples seeking marriage rights, although then-President Sebastián Piñera's government argued against the redefinition of marriage in a brief filed with the lawsuit in November 2013.

However, current President Michelle Bachelet publicly supports the new bill, and members of the Liberation group and representatives of Bachelet's Cabinet discussed the marriage lawsuit in a meeting held in Santiago on Nov. 25. However, the outcome of the meeting, and what was discussed within it, have not been disclosed in full to the public. Rolando Jiménez, President of the Movement for Homosexual Integration and Liberation, discussed Liberation's collaboration with members of Bachelet's Cabinet.

"We want to contribute significantly to the government’s interest in amplifying the debate about these issues and thus advance the approval of this norm. The marriage equality law is part of a presidential agenda for the first time, and it therefore provides the best conditions for the advancement of equality. The current marriage law is homophobic because it excludes people based on their sexual orientation. Today we are moving forward toward the end of this unjust reality."