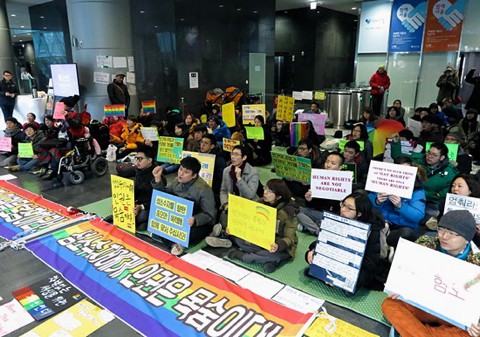 South Korean LGBT activists announced Wednesday that Seoul Mayor Won Soon Park has agreed to meet with them to discuss his decision not to proclaim a new human rights charter over concerns that it has caused "social conflicts."

The announcement comes on Human Rights Day — when the municipal government in Seoul was originally scheduled to proclaim the charter prohibiting discrimination against LGBT people. Instead, LGBT activists are in day five of a sit-in at Seoul City Hall.

The activists, under the LGBT umbrella group Rainbow Action, said on Facebook that Mayor Park has agreed to meet with them after Dec. 17, but for now they are continuing the sit-in:

Post by 성소수자 차별반대 무지개행동.
On Tuesday, Rainbow Action provided an update and pleaded for support from the LGBT community worldwide in an open letter published by The Huffington Post.

The tersely worded letter slammed Mayor Park, a former human rights lawyer who commissioned the charter to fulfill a campaign promise, for being a "turncoat" and caving to pressure from the powerful right-wing religious lobby in South Korea:

These groups of bigots have persistently pathologized and stigmatized sexual minorities and gender-nonconforming people. They have been virtually following every public event held by LGBTQ groups to violently disrupt those scenes and attack the participants for last few years. There was no exception this time. They did not hesitate to interrupt the public hearing on the Charter and consistently accused Mayor Park of being a pro-North Korea communist who will ultimately lead South Korean society astray. They keep identifying LGBTQ people with the left and condemning both as a danger to national security and social order. …

Perhaps Mayor Park chose to build a coalition with them as a foundation for his future political career because he is considering running for presidency in the next election. … We deeply deplore that has become a turncoat, and are worried about its ripple effect on our previous and potential political allies. The extreme rightists and conservative Protestant groups now have a firm ground to stand behind, and can use the mayor of Seoul's discriminatory comment to justify their agenda of fanatical bigotry.

In addition to a meeting with Park, the activists are demanding that he apologize for failing to stop anti-LGBT protesters from disrupting meetings on the charter, and that he proclaim it as originally scheduled on Human Rights Day.

The activists say international support is critical to their cause, and they are pleading with LGBT people across the globe to show their support by contacting Mayor Park via Twitter or by email.