Mead recognized that since the 10th U.S. Circuit Court of Appeals, which covers Wyoming, had struck down similar bans in other states, and that since the U.S. Supreme Court had declined to review the decision, such an appeal would be futile. As a result, same-sex couples began marrying in Wyoming. 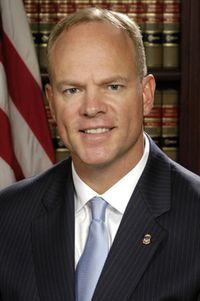 Two months later, GOP leaders in Goshen County are still smarting over the outcome, and they've decided to lash out at Mead (right). Thirty-three members of the county party's central committee have written a letter to Mead — along with the Senate president and the House speaker — slamming the governor for not appealing the decision.

“We hold that Gov. Mead was remiss in not strenuously supporting and defending our platform planks on family and marriage which was manifested in his failure to appeal the same-sex marriage ruling of the U.S. District Court,” the letter states.

“While the opportunity to appeal has regrettably passed, we call on all our Republican office holders and leaders to do all they can from this point forward to support and promote our official party platform planks relating to family and marriage.”

Mead, who was re-elected in November, issued a statement in response to the letter saying he continues to oppose same-sex marriage:

“But we need to recognize where we are with the courts, and I do recognize that. This group or other groups are free to pursue any recourse they believe is available. Interestingly, when I was fighting the case in Wyoming federal district court and a separate case in Wyoming state court, I did not hear from this group.”

Jeran Artery, chairman of Wyoming Equality, had this to say about the letter:

“The Goshen County Republicans are on the wrong side of history,” he said. “I wonder, when they issue a statement like that and sign their names to it, what their grandkids and great-grandkids are going to think of this.”

“If you are a fiscal conservative, continuing a stringent opposition to civil marriage equality in the wake of these bans getting struck down, one after another, is in many respects doing a disservice to the taxpayers of the state,” he said.

Last month, a poll found that 53 percent of Wyoming residents now support same-sex marriage, compared to only 39 percent who oppose it.

Meanwhile, LGBT advocates in Wyoming hope the marriage ruling will create new momentum for a bill to outlaw anti-LGBT discrimination.

Other county GOP groups reportedly intend to send similar letters criticizing Mead for not appealing the ruling, but despite their efforts, it sounds as though Wyoming may be on its way to living up to its nickname: The Equality State.