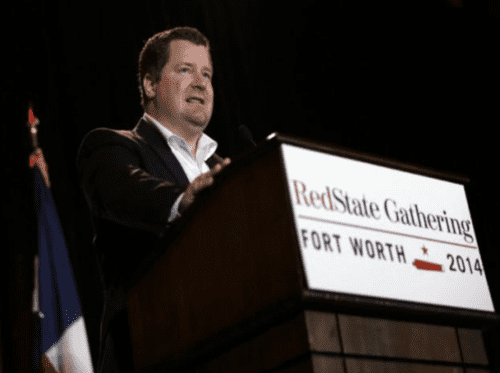 Right-wing media falsely claimed that Cochran was fired because of his religious beliefs and anti-gay remarks in a book he wrote. On Jan. 6, Atlanta Mayor Kasim Reed debunked those claims and said that Cochran was fired because the chief displayed a lack of judgment in distributing the book to his employees, and disregarded instructions regarding his month-long suspension over publishing the book without notice to the city is what led to his termination.

On Jan. 7, just hours after the horrific attack on the satirical magazine Charlie Hebdo in Paris that left 12 people dead, Erickson wrote an opportunistic blog post likening the LGBT community to terrorists for objecting to the former fire chief's book stating, "The terrorists won."

"A publisher published something that offended. It mocked, it offended, and it showed the fallacy of a religion. It angered.

"So the terrorists decided they needed to publicly destroy and ruin the publisher in a way that would not only make that destruction a public spectacle, but do it so spectacularly that others would think twice before publishing or saying anything similar.

"The terrorist wants to sow fear. The destruction of an individual is not just meant to be a tool of vengeance, but a tool of instruction. It shows others what will happen to them if they dare do the same. It is generates self-regulating peer pressure. Others, fearing the fall out, will being to self-police and self-regulate. They will silence others on behalf of the terrorists. Out of fear, they will drive the ideas from the public square and society will make them off limits.

"So they demanded the Mayor of Atlanta fire the Chief of the Fire Department for daring to write that his first duty was to "glory God" and that any sex outside of heterosexual marriage was a sin.

"And the terrorists won in Atlanta."

Previous Post: « Towleroad Guide to the Tube #1682
Next Post: Church of Scotland Approves Ordination of Gay Ministers in Preliminary Vote »