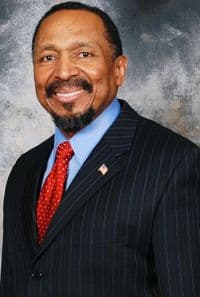 Failed Virginia Lt. Governor candidate Bishop E.W. Jackson has long since abandoned all pretense of not hating the gays, and is now prognosticating doom from the almighty upon the U.S. if gay marriage isn't stopped. Appearing on the radio show Trunews this last Wednesday, Jackson told host Rick Wiles:

While Jackson evidently has no understanding of the definition of "literally", he has a keen understanding of how to set himself up as a soothsayer: predict that some unnamed, unspecified calamity will happen at some point in the future; say that said calamity will be divine punishment for an issue one already takes personal umbrage with; when something terrible does eventually happen – an inevitability as wonderful and terrible things happen all of the time – act as if this were the exact thing you foretold and blame the prepared scapegoat, abandoning all sense of rationality.

God's punishment of the gays has been attributed to virtually everything, from autism to ebola to Hurricane Katrina. Though if things like the survival of the French Quarter during Katrina is any indication, one more prediction can be made: god's wrath has terrible aim.

You can listen to Jackson speak for himself AFTER THE JUMP…