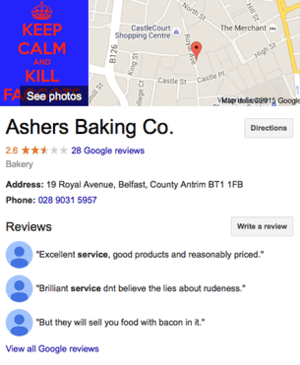 The Google Maps team has come under close scrutiny in the past few weeks following a series of distasteful images and redirects found embedded in various Google Maps locations. The problems first began back in April when users reported finding a watermark depicting Google’s iconic Android mascot urinating on Apple’s logo.

Weeks later it was discovered that typing the phrase “house ni**a” into the popular map search engine returned directions to the White House. Google has disavowed having any idea where these offensive embeds might have come from, and assured the public that it’s looking into the matters. Unfortunately, but it would appear as if it’s happened again, this time taking potshots at gay people.

Search results for Ashers Bakery, the Irish bakery that came under fire for refusing to bake a gay wedding cake, now return a riff on the Keep Calm meme that reads “Keep Calm And Kill Faggots.” Unlike the other search results that appear to have been embedded into the very fabric of Google’s search algorithm, these images were likely attached to the bakery’s profile as the result of an unknown Google user.