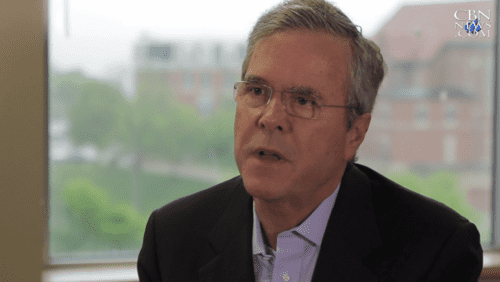 Hoping to convince right-wing Christians he’s sufficiently bigoted enough to earn their votes this election, former Florida Gov. Jeb Bush doubled down on his opposition to LGBT rights in an interview with Christian Broadcasting Network’s David Brody on Sunday.

“To imagine how we are going to succeed in our country unless we have committed family life, committed child-centered family system is hard to imagine,” said Bush. ““So, irrespective of the Supreme Court ruling because they are going to decide whatever they decide, I don’t know what they are going to do, we need to be stalwart supporters of traditional marriage.”

“It has to be — if we want to create a right to rise society, where people, particularly children born in poverty — if we want to have them to have a chance, it should be a core American value. We have to restore committed, loving family life with a mom and dad loving their children with their heart and soul.”

“A big country, a tolerant country ought to be able to figure out the difference between discriminating someone because of their sexual orientation and not forcing someone to participate in a wedding that they find goes against their moral beliefs. We should be able to figure this out. This should not be that complicated gosh it is right now.”

Watch the interview clips, AFTER THE JUMP…