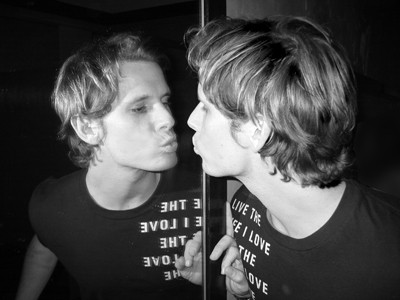 “Spitting image, yet another term for “lookalike”, was originally spit and image. Spit meant “likeness”, so the term uses redundancy to bring home its meaning. It is first recorded in the late 19th century as spit and image, and by 1925 it had taken the current form. The Oxford Dictionary of English Proverbs, however, notes the saying “as like one as if he had been spit out of his mouth” as having been recorded in 1400, so the notion behind spit and image was already alive in the late Middle Ages. An apparently spurious etymology of spitting image has the term coming from spirit and image, and another from splitting image.” — from Take Our Word For It.

With the help of our G:LAB event the other night and a couple big Red Bull and vodkas, I was able to add seven new images to the Spitting Image gallery. Thanks to those who participated, though it wasn’t too hard to find volunteers. Never question the vanity of bloggers.