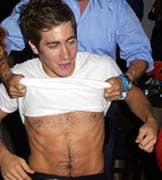 Towleroad’s source very close to the production of the cowboy love story Brokeback Mountain which is currently shooting just outside Calgary, Canada, reports in that a kiss between actors Jake Gyllenhaal and Heath Ledger was shot yesterday. According to the source “the boys were a bit nervous at first, but eventually got into it and turned in a great scene.” Towleroad isn’t speculating as to what “got into it” means.

Apparently, the two actors were only having problems with the kiss, not any of the sexual scenes, like the following moment excerpted directly from the script:

Both are warm inside JACK’S bedroll.

JACK is wide awake now. ENNIS, on his back is half-asleep.

JACK, tentative, takes one of ENNIS’S big hands from outside the bedroll
and guides it inside, down toward his own groin.

ENNIS, coming full awake, realizes where his hand is… jerks it away as
if he’s touched fire.

Raises up, gets to his knees, unbuckles his belt, shoves his pants down
with one hand, uses the other to haul JACK up on all fours.

ENNIS spits in the palm of his hand, puts it on himself.

They go at it in silence, except for a few sharp intakes of breath.

Recent reports that Ang Lee is nervous about including explicit love scenes may still hold true — all the gay stuff may yet end up on the cutting room floor, and the director has told the Calgary Sun that the sexual scenes will be “modest”. However, anyone who has read Annie Proulx’s heartwrenching story will know that this forbidden love is at the center of the tale. Ang Lee would also be a fool to let such a potent, buzz-building, controversial, and lust-inducing element fall by the wayside.

In March, Ledger told the BBC, “What is it about wrangling Jake Gyllenhaal up in the mountains that frightens me? Just that! But it obviously doesn’t scare me away because I’m doing it. Aren’t we at the stage these days when it just doesn’t ******* matter? It’s a story of love and it’s a story between two people. If people can’t get over that and just accept it as a story, then that’s their problem. I’m big enough and brave enough to do it in the fact that being brave is having to answer questions like that.”

Just recently, Gyllenhaal deflected rumors that he was nervous about the role, telling the Calgary Sun that he understood the nature of the part, and intimating that he may have had a male crush at one time: “It’s about how impossible love can be sometimes and I can relate to that. I grew up in a family where many of our close friends were gay couples. As well as that, every man goes through a period of thinking they’re attracted to another guy.”

The film’s gay storyline continues to create tremendous buzz because few if any young leading male actors have had the courage so far to step out into romantic gay roles in films of this scope. We’ll hold out hope that none of the controversy is left in the editing room.