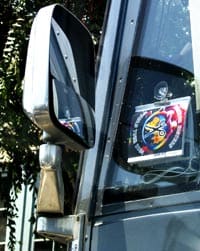 I’m often driving by The Troubadour, an historic 40-something-year-old L.A. nightclub (Elton John made his American debut here in 1970), and while I was stopped outside of it today at a traffic light I noticed the big parked bus with a Scissor Sisters program pasted to the window. I’ve mentioned SS in the past and I knew they were playing a sold out show tonight. Unfortunately I don’t have tickets, but I hear the show’s great. The domestic release of their self-titled CD was today.

Another great CD that debuted today is kd lang’s Hymns of the 49th Parallel, an homage to her homeland of Canada that features some incredibly relaxed, gorgeous covers of songs like Neil Young’s “After the Gold Rush” and Leonard Cohen’s “Hallelujah”. The solemn, resonant tracks blend seamlessly and imho kd has never sounded better.