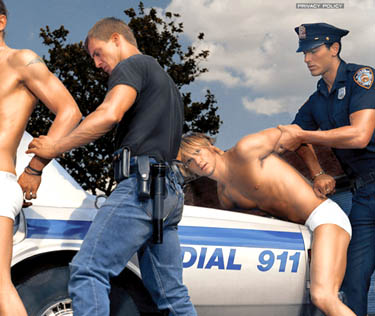 Gregory Sovell, the founder of the new c-in2 underwear line learned that sexy phrases visualized as algebraic equations worked to sell men’s underwear when he founded the 2(x)ist line back in the early 90’s. It’s interesting to see that these days what’s selling the underwear (aside from faux-cryptic brand names) is not a slab of black and white beef lit to accentuate every velvety curve of abdominal muscle but a narrative campaign that in its conception (which perhaps is solely photographer Steven Klein’s) has more to do with Tom of Finland homoerotic drawings from the early 70’s than the early 90’s Calvin Klein muscleboy pin-ups shot by Herb Ritts. They all still get a thumbs up from this camp. Hell, I still remember the old Jockey ads with Jim Palmer in them; about as sexy as a Sears catalog these days, but to an adolescent boy in suburban Chicago in the 70’s they were like the gateway drug to gay porn.

Anyway, the launch of c-in2 was last week in, where else, New York. Here’s the lowdown from Fashion Week Daily. And more shots from Patrick McMullan.