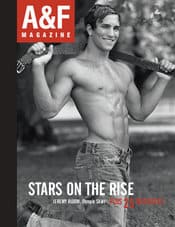 The election seems to color the way I’m thinking about everything these days. When this arrived in my mailbox, I immediately had the thought, this used to be a “blue state” publication, and now it’s a “red state” publication. When they bowed to the Christian “Family” organizations and cleaned up their act they killed their base. Everything in our mainstream culture is becoming so sanitized, so safe, so antiseptically uninteresting. I half expect to open this catalog one day to find passages of the Bible in among the fleece pullovers, and the shirtless models wearing crucifixes.

On the other hand, while A&F’s image feels decidedly watered down (not to mention dated) I think the mag could probably go on forever and ever, world without end as long as they continue to offer unclothed portraits of Olympic athlete/football players in their pages.

In that sense, is A&F the International Male of the ’00s? I haven’t received an International Male catalog in the mail in some time, but the tacky mesh underwear they offered was definitely not the reason I opened its pages. It just became a reliable place to see abs, nipples, pecs, and baskets. That’s pretty much how I feel about A&F. But since every time I open it I feel like I’m voting Republican, I think I’ll continue finding other ways to the flesh, like going straight to the source.