In preparation for the shoots, Paulo’s drug habit (diuretics!) is brought out into the open. In order to lose water weight and sharpen his abs, he takes water pills. While scolded by Kevin Peake that taking things like water pills can just go too far, we’re sure that this is really secret product placement, because who wouldn’t want to lose a quick ten pounds by rapidly pissing the contents of your body in a quick couple of hours? Take a laxative too while you’re at it — fun night! 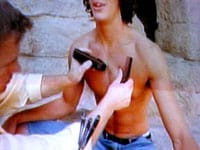 Next come the modeling shoots. Tate has his chest shaved so that he can properly sell pretzel rods, which, they make perfectly clear, are really salty, crunchy representations of cock. To make this clear, they have Tate suck, lick, and massage the pretzel rod with his lips, finally taking a whole bunch of them and shoving them all down his throat at once, causing the photographer to exclaim, “If you can shove that many rods in your mouth!” Yeah, we got it. 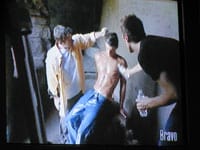 The other models are given various products to whore out, all shirtless of course. Not complaining here. Jon Jonsson is given Nair for Men (drink!), Hunter is doused with Evian water in his Levi’s, Kevin O looks pained with his bicycle (definitely not “rockin’ it”), Rob poses naked with rolls of toilet paper (god I love Rob more and more each show), Paulo shows that water pills really do work, and Maurice manages to look severely constipated with an iPod.

Later, drinking escapades bring out the fact that Rob is gay when the models are relaxed later back at the hotel. This seems to disturb model Hunter, who goes off about people’s “points of views” and says he “had never even heard someone say they were gay before.” Does this mean the Backstreet Dance Club in Little Rock has a “Don’t Ask, Don’t Tell” policy?

Hunter gets a piece of advice on elimination day when the photographer critiques his photo. “The only thing is I think you could add a little more masculinity. Not so feminine. More masculine, you know, like ‘Rarrr’.” Hunter looks surprised. I actually think he knows “Rarrr!” 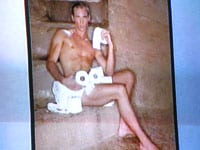 Jon Jonson receives a helpful piece of advice from judge #1, former model Bruce Hulse. “Is that a zit I see? Get rid of it.” Hulse then admits to toilet paper Rob, “Thats an obscene photograph to me but I like it.” Rob also gets critiqued for being “too feminine” by a skanked-up Stuff Magazine photo editor, whom I think was just a bit jealous of Rob’s pretty looks.

This show just gets better and better.

As the models wait nervously for the elimination, alcoholic Tate boozes it up with his own personal bottle of wine and antagonizes Hunter by calling him Seth. This incenses Hunter, who demands he be called “Hunter”, and the ugly spectre of homosexuality is raised again, in another flurry of cursing and more subtitles (everybody drink!).

Four models are eliminated this episode, and in a shocker, South African hair diva, water pill-ingester Paulo is tossed, as is another of our favorites, Matt, who is sure to turn up in the WB’s next teen-angst drama. Good-bye Jason, Matt, Paulo, and Kevin O. And thank you Kevin O., for giving us the obligatory Manhunt sob session.

Past updates:
[Big Boys Don’t Cry]
[Anyone Want Some Wood?]
[Attack of the Clones]
[A Rope to Hang Me With]