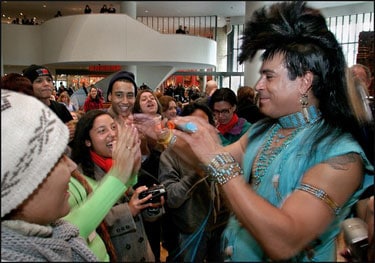 Their strangest bequest yet: The National Museum of the American Indian receives a gold “YMCA” record from Village People Indian Felipe Rose.

“And the museum happily and ceremoniously accepted it (a Lakota prayer was sung first, then everyone danced to “Y.M.C.A.”), on the precept that sooner or later they might need such an artifact of a bygone era, perhaps to flesh out a future exhibit on the folkloric value of disco, and native cultural responses to it. (No, you shut up. It could happen. Why not? There are only so many ceramic pots, war bonnets and kachina dolls that people can stand to look at, and so when the day comes that someone asks, Hey, what about the Indian dude from the Village People? the Smithsonian, as ever, will be ready.)”

Rose, who is part Lakota Sioux, wanted to do something to help the museum. “Indian Museum curators said they want to recognize a sort of poignant accomplishment in Rose’s perpetuity as an Indian icon of pop culture.”