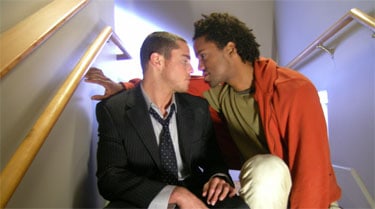 Some new photos are up from the Q. Allan Brocka production of Boy Culture which wrapped in November. Boy Culture is based on the Matthew Rettenmund novel of the same name that follows the relationships of a hustler named X.

Filmmaker Todd Haynes is diving into experimental territory again with a film about Bob Dylan. In I’m Not There: Suppositions on a Film Regarding Dylan, Haynes will cast six black men and one black woman (possibly Beyonce) to depict Bob Dylan at various stages of his career in an effort to convey the singer’s “inner blackness”. Said Haynes: “I am setting out to explode the idea that anybody can be depicted in a single self.”