SpongeBob has total screen time of maybe two seconds in the “We Are Family” video that gets its first airing today at a Manhattan elementary school. Conservatives make the ridiculous charge that the video, which can be viewed here, is pro-homosexual.

While SpongeBob’s pose in this screencap is certainly suggestive of something, I’d have to say that the gayest thing in the video is the resurrection of that ol’ disco icon Miss Diana Ross. 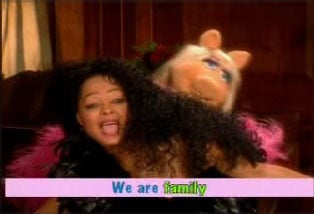