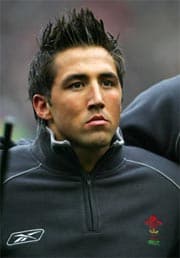 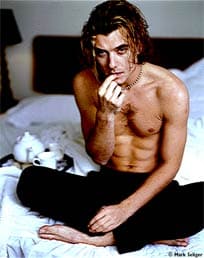 The “it” boy of Welsh rugby, Towleroad favorite Gavin Henson seems to be following in David Beckham’s footsteps very carefully. All it takes is a well-gelled lick of hair for an athlete with a touch of character and a set of waxed legs to seal a deal with a grooming company. Henson, who says he’s 6′ or 6’2″ depending on whether or not you count the hair, looks to be close to signing a deal with Brylcreem. Brylcreem, if you’ll remember, recently presented a set of sexy ads featuring naked models chopping sausages, riding to work, and doing other everyday activities. I can only hope they’ll hold on to that theme when Henson takes his turn in front of the camera.

Meanwhile, Bush’s Gavin Rossdale says he’s not gay, brushing off the statements in Boy George’s autobiography Take It Like a Man that spotlight a relationship between he and drag personality Marilyn. “I wasn’t dating Marilyn. We were, and still are, good friends. George thinks everyone is gay.”