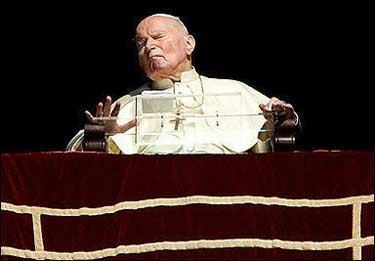 Pope John Paul II was never good to the gays.

When Pope John Paul II came into power he set a different course for the Catholic Church’s policy on homosexuality, which had begun to take a more tolerant tone during the 70’s.

The first statement from the Vatican under his guidance came in October of 1986 in a letter to Bishops of the Catholic Church. In a nutshell, it said that even if homosexuality is genetic it is still an “objective disorder”; even if it is not a sin, it is still evil:

“Although the particular inclination of the homosexual person is not a sin, it is a more or less strong tendency ordered toward an intrinsic moral evil; thus the inclination itself must be seen as an objective disorder. Therefore special concern and pastoral attention should be directed to those who have this condition, lest they be led to believe that the living out of this orientation in homosexual activity is a morally acceptable option. It is not.”

His second statement came in 1992, in response to new gay rights legislations being drawn up in the U.S. He basically said that when the rights of homosexuals are protected, family and society are threatened.

“Recently, legislation had been proposed in some American states which would make discrimination on the basis of sexual orientation illegal. …Such initiatives, even where they seem more directed toward support of basic civil rights than condonement of homosexual activity or a homosexual lifestyle, may in fact have a negative impact on the family and society… Even when the practice of homosexuality may seriously threaten the lives and well-being of a large number of people, its advocates remain undeterred and refuse to consider the magnitude of the risks involved.”

His third major statement came most recently, in an excerpt from his book, Memory and Identity which was summarized as:

Homosexual marriages are part of “a new ideology of evil” that is insidiously threatening society.

We can all hope that in his passing the Catholic church will seek a path toward enlightenment, but in light of the more fundamentalist grasp on religion in the world today, it’s hard to be optimistic.