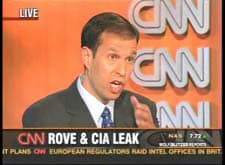 Some choice bits on the unfolding Karl Rove scandal:

Republicans release talking points in an attempt to discredit reporter Matt Cooper, taking the focus off the fact that Karl Rove compromised national security in a time of war and trying to make the whole incident look like a smear campaign by the Democrats.

CNN’s Kyra Phillips, in a FOX news moment, insists there’s “definitely a major smear campaign going on” while others at the network wonder if it’s “worse than Watergate.”