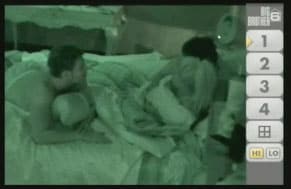 Now Beau, the gay contestant on Big Brother 6, hasn’t yet proven himself to be an upstanding character (he’s part of an alliance called “The Friendship” which is definitely not my favorite group of kids) but Janelle (who is part of the other alliance) really proves she can talk some smack on these clips from the live internet feed of the show. This is something you definitely won’t be seeing on the CBS broadcast.

Janelle spits out, “Beau is a fucking cokehead. He fucks rich old men, gets fucked in the ass. They fucking do blow off his fuckin’ asshole.” Wow. Janelle is obviously drunk in this clip but she’s the last person who should be pointing fingers. This is the first time I’ve ever seen her be such a spiteful homophobe bitch. I’m interested to know what triggered this.