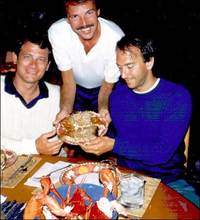 Although David Colman recently outed “Gay Vague” in the NYT as a singularly “now” phenomenon, I’ll go so far as to posit that the trend was ripe for investigation way back in those Reagan 80’s, citing this photograph of SCOTUS nominee John Roberts and friends on Martha’s Vineyard as an example.

The photograph recently appeared in another NYT article about Roberts’ time at Harvard and was immediately picked up by blog Underneath Their Robes in its continuing quest for “John Roberts is Gay” evidence.

While I see no hard, cold information to support any argument that Roberts might be gay (aside from perhaps a compelling characterization of Peppermint Patty in his all-male high school production) there is evidence in this photo that the “Gay Vague” phenomenon was already incubating during Roberts’ lobster boil days. (click for larger version)

John Roberts and his friends Don Scherer and Richard Lazarus display several attributes that might be characterized as gay vague:

Unafraid to display physical closeness to other males.

Meticulously groomed facial hair (Magnum, is that you?).

To me, this looks about as “we are family” as it gets.