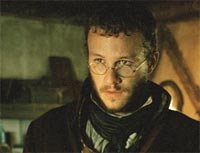 Heath Ledger, whose next movie is Terry Gilliam’s The Brothers Grimm co-starring Matt Damon, talks to Dark Horizons about the differing directing styles of Gilliam and his Brokeback Mountain director Ang Lee:

“Terry knows everything about me while Ang knows NOTHING about me. The only conversation you really ever have with Ang is just really kind of obscure, profound little bits of direction or insights to a character, but at the same time these were also just two completely different movies to work on. Brokeback Mountain was a very lonely experience and it was supposed to be and my character was extremely lonely and I think I carried that through the whole experience. They’re both wonderful directors and definitely both have the same level of attention to detail. Sometimes Ang will be like, ‘Okay, drag cigarette. Okay, blow out. Okay, look at mountain. Okay, now look at feet. Look back at mountain. Okay.’, ” he says, imitating the Asian director. “You try to take this in, make it look natural. Terry does that too in a way, but when he yells things out to you, it’s kind of in different tones. Plus Terry laughs a lot more.”