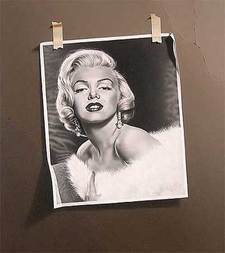 Marilyn Monroe’s thoughts at the time of her August 1962 death show no indications of suicidal thoughts, says L.A. prosecutor John Miner, who heard a number of confidential tapes the actress made with her psychiatrist in the weeks before she was found dead in the bedroom of her Brentwood, California home. The tapes do reveal an ambitious woman who was uncomfortable with parts of her famous figure, an involvement with JFK’s brother Bobby, and an unsatisfactory fling with Joan Crawford.

On her lesbian tryst with Joan Crawford: “Next time I saw Crawford, she said she wanted another round. I told her straight-out I didn’t much enjoy doing it with a woman. After I turned her down, she became spiteful.”

On her affair with Bobby Kennedy: “There is no room in my life for him. I guess I don’t have the courage to face up to it and hurt him. I want someone else to tell him it’s over. I tried to get the president to do it, but I couldn’t reach him.”

On her figure: “My breasts are beginning to sag, my waist isn’t bad, my ass is what it should be — the best.”