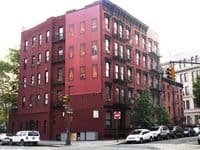 Wonder where AdRants got this idea?

My text: “Exploiting the New Yorker’s penchant for voyeurism (and the city’s reputation for crime), Court TV yesterday installed this three-story camouflauged advertisement on the side of a residence at King Street and Sixth Avenue. It’s really quite an amusing little cartoon. As an unsuspecting tenant is about to be hacked to death by an intruder with a butcher’s knife, life goes on as usual for the other tenants in the building.”

Their text: “Court TV has erected a piece of “advertecture,” a huge banner that looks like the building it is draped upon but carries artistic renderings of windowscapes and, of course, the Court TV logo. If you look closely, you can one apartment dweller about to be whacked with a butcher’s knife while other tenants are oblivious. Can you say voyeurism? The board is located on King Street in New York’s Soho neighborhood…”

They could have done a better job of disguising my writing, but at least they had someone run down and take their own picture.