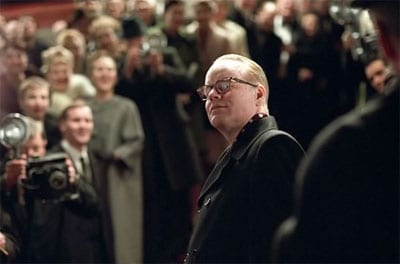 Media manipulation, narcissism, ethics, murder, literature. I’m hoping that Capote is as good as people are saying. Although it didn’t make the first official list of Oscar odds released by BetWWTS.com, Phillip Seymour Hoffman’s performance is said to be statue-worthy. Here is a round-up of the latest chat about Capote, which opens tomorrow on the coasts:

Truman Capote probably wouldn’t have liked the film: “Capote himself probably would have chafed at the insights into the darker parts of his character – his neediness and greed, his selfishness and questionable ethics – that director Bennett Miller and writer Dan Futterman offer in their astonishingly assured feature debut…But the genius of Futterman’s script, adapted from Gerald Clarke’s biography, is how it shows that In Cold Blood represented both the zenith of Capote’s fame and acclaim and the beginning of his social and psychological unravelling.”

Hoffman scared of role: “I was like, ‘What the hell?’ I literally said, ‘What the hell?’ Then I started watching material on Capote, and I thought, ‘Oh. My. God. There’s no way I’m going to do that,'” Although he was an executive producer as well as the film’s star, Hoffman hoped the project would fall through. “I thought, If we never get the money, we’ll all be off the hook.”

Hollywood Reporter on Phillip Seymour Hoffman’s preparation: “Hoffman shed more than 40 pounds, and rehearsed with Miller, mostly in the director’s apartment, mining Capote’s ambition, greed, narcissism, self-interest and shame. That was more than two months before production began in Winnipeg, Canada.” Director Bennett Miller: “Phil was able to … take the physicality of the character and really ingest it and own it completely so that he could really get to the core of this guy and play the complexities. And sometimes it would happen that Phil would have prepared one way, and we would discuss things — maybe we agreed, maybe we disagreed — but the cameras would roll and he would enter the room. He would then do the exact thing he argued against doing because once he was in that moment his head was no longer in control. He was really leading from his instincts and his gut …”

The evolution of the film’s production—a project among friends: “We were, like, leaning forward. If we could have reached forward and grabbed them, we would have. We knew that if it didn’t come soon, it wouldn’t.”