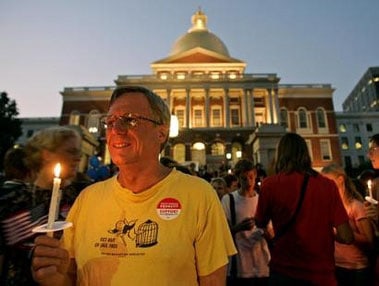 Tuesday night, gay marriage supporters held a vigil and rally outside the Boston statehouse before a Constitutional Convention vote Wednesday on a proposed amendment to ban gay marriage. The proposed amendment is expected to fail, but supporters of same-sex marriage showed up nevertheless, along with a smaller group of opponents. Over 6,100 same-sex marriages have taken place in the state over the past year.