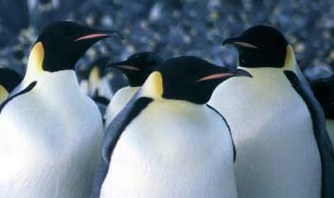 Conservative Christians have demonstrated their ignorance once again by championing March of the Penguins as an argument for intelligent design. In the film, the penguins march over 70 miles to breed, lay eggs, and protect that nest for a long, frigid, stormy winter. “That any one of these eggs survives is a remarkable feat – and, some might suppose, a strong case for intelligent design,” Andrew Coffin wrote in a Christian magazine. “It’s sad that acknowledgment of a creator is absent in the examination of such strange and wonderful animals. But it’s also a gap easily filled by family discussion after the film.”

Why don’t we also include Roy and Silo in that discussion? They’re the gay penguins at the Central Park Zoo who so yearned to bring up a youngster that they took care of a stone for several weeks hoping for it to hatch. Now I’m not sure that’s an argument for “intelligent” design, but it certainly proves that in the penguin world they’re not all marching towards heterosexuality.

Then, of course, there were the three out of five pairs of penguins at the Bremerhaven Zoo in Germany that were found to be gay. Researchers there attempted to cure them of this, but their little “Love in Action” plan didn’t work.

There were also 20 pairs of penguins in Japan discovered to be gay.

Apparently, the Christians did not do their research. While watching March of the Penguins myself a few months ago, I wondered what the gay penguins did while the straight ones performed their harrowing 70 mile journey in pursuit of wild straight penguin sex. Did they hang back and have their own little party by the coast rather than waddle for miles along barely sunlit ice floes and risk being frozen into feathery little penguin popsicles? Now that would be intelligent design. Or maybe they have their own separate Pride march?

But Columnist George Will asks the most sensible question of all: “If an Intelligent Designer designed nature, why did it decide to make breeding so tedious for those penguins?”

Something for the Kiddies [tr]