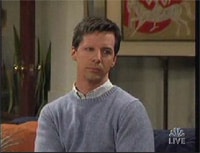 I sort of skipped out on the last four seasons of Will & Grace but thought I would tune in for last night’s live premiere, which was worthwhile because of all the line-dropping and giggling that ensued between Debra Messing and Sean Hayes. There were a few points where Megan Mullally almost lost it as well but held her composure. After seven seasons she and Hayes are still the stars of the show. The Malcontent has posted a clip of highlights.

One hilarious line is omitted from the clip though. After Alec Baldwin’s passionate kiss with McCormack, Baldwin stood there with his bag of melting ice cream sandwiches at his side and McCormack looked down at that area and said, “Your package is dripping.”