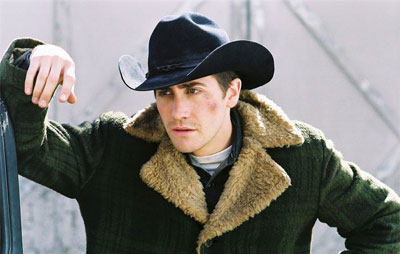 Ever since I read it in The New Yorker back in 1997, Annie Proulx’s “Brokeback Mountain” has been one of my favorite short stories

. The breadth of emotion Proulx is able to convey in just a few short pages is epic in scope, and by the end of my first reading, the pages of my magazine were wet with tears.

It is with that expectation that I went to see the screen version, Ang Lee’s adaptation starring Heath Ledger and Jake Gyllenhaal, a film I had been writing about for months on this site.

I saw the film in early September. I’ve declined to write about it till now because I wanted to let it sink in for awhile, wanted to see if a month later I was still feeling the same way about it. And I am.

Lee’s adaptation is everything I wanted it to be — stunning visually, emotionally solid, true to the original story — but at its core it expresses a knowledge of the secrecy and the gut-wrenching pain that gays experience when required to abide by society’s heterosexual models for fear that their true feelings, if exposed, will engender shame, humiliation, or violence. This film begins in the early 60’s but we all know that even today there are men who live entire lives in the closet, never able to allow life its full expression.

So it is in the spare, hard, rugged Wyoming of Brokeback Mountain, a place so determinedly straight that we are shown early on that those thought to be queer run the risk of being beaten into a bloody, ragged corpse and left to die by the side of the road. 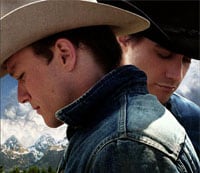 But sometimes fate offers an opening, as it does when Ennis del Mar (Ledger) and Jack Twist (Gyllenhaal) are hired to herd sheep together up on Brokeback. Up on that isolated ridge, they find the time and place to consummate the lust inside of them and once that genie is out of the bottle it can never be put back. And once the intense outpouring of first lust has passed, it’s almost impossible to recapture, particularly when the rules in the rugged, rural west are that men must marry women and father children.

“A one shot thing we got goin’ on here,” del Mar says to Twist, in tune with the painful realities.

That is the crux of this movie, an epic, slow-moving, genius film that is not so much a film about the taboo nature of gay sex as it is about the pain that will no doubt prevail when one is forced to hide one’s true sexual proclivities behind a veil of secrecy.

“I wish I knew how to quit you,” famously uttered by one of the cowboys in the movie’s trailer, betrays both a personal conflict and a societal one, and Lee demonstrates that he understands both heartbreakingly well.

Although the American West serves as the foil for this particular gay story, being forced into secrecy is a situation that homosexuals throughout history have accepted out of necessity. That is why this film, though it takes place over a span of nearly two decades, feels thoroughly modern.

And then there’s the sex. For the first time, two young A-list actors rising in their careers have taken on roles that require them to not only sell an audience their affection toward one another, but also their overt sexual undertakings. 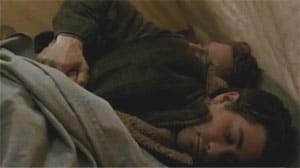 The two actors make out hungrily, wrestle around, intimately embrace naked by the golden light of a campfire, and if you’ve read the Proulx short story you’ll remember this bit:

“Ennis ran full-throttle on all roads whether fence mending or money spending, and he wanted none of it when Jack seized his left hand and brought it to his erect cock. Ennis jerked his hand away as though he’d touched fire, got to his knees, unbuckled his belt, shoved his pants down, hauled Jack onto all fours and, with the help of the clear slick and a little spit, entered him, nothing he’d done before but no instruction manual needed.”

What makes Brokeback something that may draw in all audiences and not just gay ones is the fact that it is a love story, a uniquely dramatic tale of forbidden love in a highly familiar cinematic context.

Ledger gives an astonishingly mature performance as the gruff, pent-up, strong and silent Del Mar while Gyllenhaal’s rangy and likable Jack Twist fills the tale with a recklessly unfolding hope that lingers long after the movie reaches its dramatic conclusion. Anne Hathaway and Michelle Williams give seamless expression to the frustration of Western women — in Williams’ case, the simmering fire of knowledge about her husband’s secret exposes a world of pain. She’s quite brilliant.

The film is gorgeous to look at from its opening scene — a truck winding its way across big sky country; the gray, wooly rivers of sheep the cowboys drive up the side of the mountain; and an impossibly idyllic buttery moon that flickers over those lust-hungry nights on Brokeback Mountain. Gustavo Santaolalla’s score is spare and haunting.

Lee has made a film many are calling “old-fashioned” because of its quiet, linear pacing. Be ready for that when you experience it and don’t mistake it for anything close to naivete. It’s just one of the ways that Lee has honored Proulx’s storytelling while at the same time subverting the long-honored American cinematic tradition of the Western that is expected to move at a less than frantic pace.

I’ve given this film a lot of ink on these pages, and I’m happy to say it was well worth it.