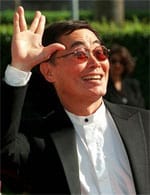 And mainstream news outlets dig up the gayest possible 8-year-old AP photo (left) they can find to make the point.

Takei, who played Mr. Sulu on the long-running series, tells Frontiers Magazine: You know, it’s not really coming out, which suggests opening a door and stepping through. It’s more like a long, long walk through what began as a narrow corridor that starts to widen. And then some doors are open and light comes in, and there are skylights and it widens. Brad’s my partner, we’ve been together for 18 years. So, I’ve been ‘open,’ but I have not talked to the press. In that sense, maybe that’s another opening of the corridor there.

He says joining L.A. running club Front Runners helped him come out as well: “And at a bar, you see a paper, and you see a gay running club. ‘Oh, I’ll show up,’ you think. People would see me and they were kind of astounded, but I ran with them, they saw that I’m George, not Sulu. So your frame of reference, your community broadens. And as I said, that corridor that was narrow becomes wider and brighter. And you start realizing that this is ‘normal.’ For me. There’s a lot of talk of normality. Equus (Takei is starring in a Los Angeles production) talks about this, too. The large popular normality is that rigid, constrained normality. But there’s another natural normality. And you come to realize, ‘This is who I am. And by gum, I’m not going to let it be a constraint!’