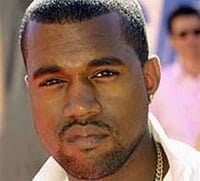 Lloyd Grove reports on a Kanye West interview with King magazine in which he discusses his ongoing relationship with homophobia, a topic he spoke out against earlier this year. He says speaking out against homophobia was scarier than calling George Bush a racist:

“I’m still trying to get over my own homophobia. I still wouldn’t feel comfortable at a gay bar. I wouldn’t go to a gay parade. I don’t know if I’m in favor of gay marriage or not. People said to me, ‘Were you scared of speaking out against George Bush?’ No. The bravest thing I did this year was speaking out against homophobia. That’s a scarier topic, because if you bring it up, people think you must be gay. But you don’t have to be gay to not gay-bash. We’re a very close-minded people.”

West recalls that it was a homophobic incident he was involved in with another rapper that woke him up to his own bigotry: “We started rhyming about beating up gays right in front of him. .. People always say, ‘Kanye’s conscious, Kanye’s conscious’ – well, my conscience kicked in, and it said, ‘Yo, that was kinda wack.’ Things have been clicking ever since. I found out my cousin was gay years ago, and even just dealing with my interior decorator, having to travel with him, I’ve had to deal with issues. There was a point I wouldn’t even get in the car with him ’cause I didn’t want people to see me with a gay person. I didn’t want it to hurt my career.”

Will somebody please take Kanye to a gay bar?