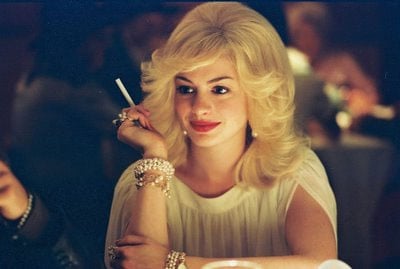 Thought you were gonna get away without a big Brokeback update today? You thought wrong. But first, I’ve failed in any of my commentary to give props to whomever put together this look for Anne Hathaway. Flawless.

Ex-gay Stephen Bennett and his wife Irene are leading a charge of their own against the film, though they haven’t seen it. Scared it might hit too close to home, perhaps. Anyway, the following dross issued from their pieholes most recently: “We are very troubled to hear this movie may contain or imply the graphic homosexual sex in Proulx’s short story. Whether it does or not, many who’ve seen the movie are now looking “for more” and reading Proulx’s short story, which explicitly contains ALL the pornographic and graphic homosexual sex one demands.”

Egotastic gives those straight guys whose masculinity might be threatened by seeing two cowpokes in love a few good reasons to see Brokeback — female breasts.

Fox News says Steve Martin’s statement at the Oscars that “We’re all gay” has become a self-fulfilling prophecy. 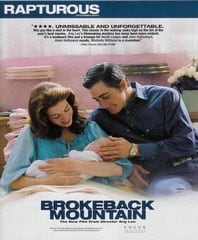 PunditGuy has something to say about the de-gayification of Brokeback and he just may have something. The promos he speaks about I believe are meant for industry trades in order to promote the film for Oscar consideration, and not for mainstream press, but I have to say that I’ve seen more than a couple and all of them feature strictly hetero star pairings.

“During the height of what history will hopefully acknowledge as the new era of McCarthyism—when homosexuality and terrorism walk hand-in-hand much as desegregation and communism did five decades ago—there is a queer revolution going on. This new battle of gay liberation, building on the foundations laid in the aftermath of Stonewall, seeks to do more than recoup the losses incurred in recent years. What is going here is a complex issue—clouded under the rhetoric of same-sex marriage and eternal damnation—that is, quite plainly and simply, a matter of civil rights. Few people want to call it that, as if the acknowledgement of such somehow humanizes lesbians and gays in a manner they don’t deserve. But the truth is that queers—much like blacks in the early part of the 20th century—are not seen as human beings. And so the struggle at hand is to be seen as humans.”

Ang Lee talks to The Montreal Mirror and tells them that people keep asking him how he thinks the right wing conservatives will see the film, and he’s a bit tired of it: “Actually, from the get-go I was more concerned about how the gay community would see it. I mean it’s a story about gay lovers, yet nobody asks me if I’m concerned about what gay people think.”

Miles Christian Daniels of the Baltimore Sun applauds Brokeback‘s breaking down of stereotypes: “Now, through movies such as Brokeback Mountain, Hollywood is shedding light on the fact that not all gay men are fashion gurus, hair dressers, interior designers and superior in the arts, but that some might be – God forbid – cowboys herding sheep in Wyoming.”

Review by Bruce Newman at the San Jose Mercury News:
“Occasionally, the cowboy roundups are bathed in such iconic imagery that they begin to resemble Abercrombie & Fitch ads, but Lee allows a beautifully minimalist script by Larry McMurtry and Diana Ossana to take the actors to the hard places they need to go. And they never fail to deliver.”

Right wing site World Net Daily gives the film a resounding Bible-beating:
“As we predicted above, there are sure to be many leftwing awards for this twisted, laughable, frustrating, plotless and boring piece of homosexual, neo-Marxist propaganda. If only the leftists, radical feminists and communists would show the same compassion for the wives of homosexual perverts like these two characters, the world might be a better place. Don’t count on that happening any time soon, however.”

Movie critic Craig Outhier tells people to get out and see it:
“Ang Lee’s ‘Brokeback Mountain’ has been described in various circles as ‘the gay cowboy movie,’ an alias both glib and faintly humorous. It suggests independent filmmaking at its most precious and contrived: Oil-rig foremen who pour their hearts into haikus, jobless steelworkers who disrobe for money. What a pleasure to find instead a spare, clear-eyed drama about the sorrow of unrequited love.”

Chicago’s Metromix gives the film a positive review:
“Thanks to the slow-burn passion of its leading men, ‘Brokeback Mountain’ maintains an elegant sadness, as love threatens to drift away like tumbleweeds. It’s a gorgeous meditation on the sorrow of finding everything you want and not knowing how to keep it. Forget its Oscar chances; ‘Brokeback Mountain’ could be the foundation for next year’s hit show, ‘Queer Eye for the Marlboro Man.'”

The Towleroad Guide to Brokeback Mountain.