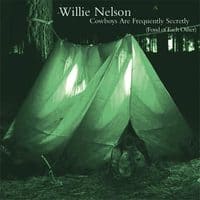 Valentines Day has brought a Willie Nelson love letter in the form of “Cowboys Are Frequently Secretly Fond of Each Other,” a song the singer says has “been in the closet for 20 years. The timing’s right for it to come out. I’m just opening the door”

Howard Stern debuted the track on his Sirius radio show this morning.

While Nelson recorded a beautiful song for the Brokeback Mountain soundtrack, “He Was a Friend of Mine”, the new song was written long ago and shoved in a drawer with a bunch of old demos, according to the Dallas Morning News.

Mr. Nelson recorded a song for the Brokeback Mountain soundtrack, the melancholy ballad “He Was a Friend of Mine.” And the movie about two cowboys in love may have provided the perfect opportunity to release this new song. But Mr. Nelson also has a personal connection to the tune.

Two years ago, David Anderson, Mr. Nelson’s friend and tour manager of three decades, told his boss he’s gay. Last March, while Mr. Nelson recorded a batch of previously unreleased songs for iTunes, he discovered the song in a stack of demos he had tossed into a drawer.

Singing “Cowboys Are Frequently Secretly Fond of Each Other” was Mr. Nelson’s way of telling a longtime pal everything was OK, says Mr. Anderson.

“This song obviously has special meaning to me in more ways than one,” says Mr. Anderson, who lives in Dallas. “I want people to know more than anything – gay, straight, whatever – just how cool Willie is and … his way of thinking, his tolerance, everything about him.”

Willie Nelson is definitely a friend of mine.

Cowboys Are Frequently Secretly Fond of Each Other

He Was a Friend of Mine