Human Rights Watch demands Nigerian President Olusegun Obasanjo withdraw bill that would punish its citizens with “up to five years’ imprisonment for anyone who engages in homosexual sex, organises gay rights organisations or partakes in, sanctions or witnesses same-sex marriage ceremonies.” 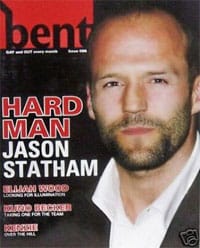 Jason Statham gets hard for Bent.

The Joy of Sex at work in Morrissey’s Ringleader: “One shouldn’t be startled to hear a middle-aged man singing about having sex with another man, but this is Morrissey, who has spent 30 years deflecting questions about his sexuality by claiming that he didn’t have sex with anyone. Twenty-three years after offering the most memorable come-on in pop history – “you can pin and mount me,” suggested the Smiths’ Reel Around the Fountain, “like a butterfly” – here he is, finally admitting that someone has taken him up, so to speak. The subsequent relief yields one of the loveliest and most affecting moments of his entire career: strings soar, drums thump and Morrissey’s voice vanishes slowly into the distance, singing: “The heart feels free, the heart feels free.” He sounds contented, which proves oddly touching – and that there’s a first time for everything.”

Former NFL player Esera Tuaolo speaks of childhood in new memoir: “Fear started for me when I was a young kid, hearing friends of mine call other kids faggot or that he likes to play with Barbie dolls. I saw a part of me in that kid, because that’s what I wanted to do! I wanted to play with Barbie dolls, I wanted an Easy-Bake oven! That’s the day I took that child within all of us and threw him in the closet. I had to be bigger and stronger and faster than anybody else so that they wouldn’t know that I was gay. I wouldn’t be that kid getting beat up, that kid getting rocks thrown at him. Not me. I put on that happy face, I smiled a lot. I was just Mr. Aloha.”