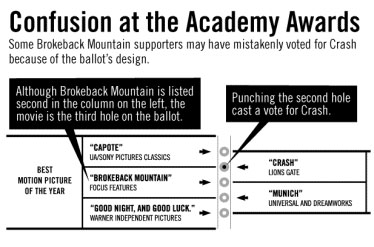 It was the butterfly ballot!

This obviously is not the real Oscar ballot but a humorous mock-up. I’m going to try and not prolong the pain of speculating about why Brokeback lost for too long, but folks seem to still be talking about it, so here are a few relevant items. The folks over at Dave Cullen’s site are putting money out for an ad to go in a publication, thanking the filmmakers.

There’s a brief, interesting piece over at USA Today offering glimpses of what you didn’t see on Academy Awards night, or might not have caught, like Jack Nicholson confiding in shock that he voted for Brokeback, or a disappointed Ang Lee in the backstage wings: “He silently walks away as the Crash producers begin their acceptance speech, a wan smile on his face.”

Finally, there’s Gore Vidal, who despite what you might think about his politics, always gives good interview. Here he chats about the Oscars:

On BBM: “I liked it, I thought it was quite moving, obviously thematically it’s important to do a picture like that about two ordinary men, seized at a time in which all this is forbidden and so on.”

On America’s ridiculous attitude towards sex and homosexuality: “Look, homophobia is fed into every child in the United States at birth. It is unrelenting, it never lets up. They asked a whole raft of high school boys across the country a couple years ago, one of those polls about what they would most like to be in life, and what … they would hate to be, and so forth, and what they would most hate to be was homosexual. There wasn’t anyone, not one, who just skipped the question. They all said ‘oh no, that’s the worst thing you could be.’ To get over that training, that’s generation after generation. And it has not done the character of our nation much good. And that’s why we are a joke to the rest of the world, because we carry on about sexual matters everyone else has forgotten about.

On Truman Capote: “[Sighs.] I spent half a century trying to avoid him, in life, and now suddenly I’m surrounded by him. He was a pathological liar. He couldn’t tell the truth about anything, and he’d make it up as he went along. He always wore dark glasses, and his eyes would drop behind the dark glasses, and he would seem to be looking down at his nose, and then as he got more and more frenzied—the lies really very frenzied, they were orgasmic—you would start to see the eyes begin to roll up to see if you’d fallen for what he was saying. “