Can gay families attend the Easter Egg Roll at the White House? Laura Bush says yes, all families can. 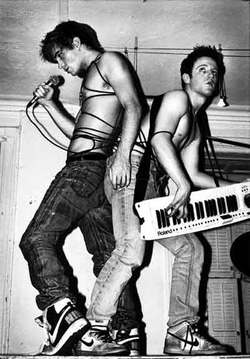 Everybody seems to be talking about Dangerous Muse, and I have to agree I think their tracks are pretty great. A Socialite’s Life is having a Dangerous Muse contest.

Culture of corruption: Disgraced politician Tom Delay returns to Washington and gets a hero’s welcome.

Brand new Erasure CD to be previewed at 10am EST in its entirety on Sirius OutQ and Andy Bell and Vince Clarke will be there.

Clay Aiken’s worst nightmare now has a blog and on it photographs of the DNA encrusted washcloth.

Secret Lovers: TBS promoting Lord of the Rings as a gay romance: “Are Sam and Frodo a little more than friends? Not that there’s anything wrong with that.”

Page Six: “WHICH closeted local hockey pro is having a secret affair with a 19-year-old Latino hunk, who is rumored to sleep with “lots of old men” around town for money and gifts?” Wouldn’t it be nice if it were the New York Islanders Rick diPietro?

Walmart has ignored the cries of the American Family Association and decided to go ahead and sell the Brokeback Mountain DVD in their stores. AFA spokesman Randy Sharp: “It wasn’t even a blockbuster movie, so if Wal-Mart isn’t trying to push an agenda, why would they put it at the front door?” With an international box office of $165 million I’d say BBM did pretty well. And word is out that the DVD sold 1.4 million units on its first day of release!