Crying ‘religious persecution’, a growing number of right-wing Christians are suing for the right to be intolerant: “The religious right aims to overturn a broad range of common tolerance programs: diversity training that promotes acceptance of gays and lesbians, speech codes that ban harsh words against homosexuality, anti-discrimination policies that require college clubs to open their membership to all.” 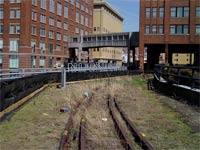 Photos from today’s groundbreaking at the High Line, New York’s elevated park-in-progress: “Plenty of luminaries on hand made this the feelgood urban planning event of the year.”

Andre Seguin, a gay man convicted for killing his lover Stephane Croteau, is on the lam from a penitentiary in Quebec: “The couple had purchased cocaine which Croteau was in the process of snorting when the quarrel began. Croteau threatened his partner with a knife, but Seguin wrestled it away and began stabbing him. Croteau suffered 17 stab wounds to his chest and three to his back. Police said Seguin is suffering from a grave illness and is not necessarily considered dangerous.”

Prison guard disciplined for screening Brokeback Mountain: “I want to make it clear, it wasn’t the subject matter — it was the graphic nature of the sexually explicit scenes.”

New York weatherman Sam Champion reportedly has a new beau with a background in adult entertainment. 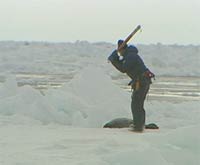 Fur is murder too: Morrissey says he won’t be taking his tour to Canada because of the massive baby seal slaughter. Statement: “The Canadian government will stream all of the pelts into the fashion industry and this is the reason why the baby seals are killed with spiked clubs that crush their skulls – any damage to their pelts is avoided. The Canadian Prime Minister also states that the slaughter is necessary because it provides jobs for local communities, but this is an ignorant reason for allowing such barbaric and cruel slaughter of beings that are denied life simply because somebody somewhere might want to wear their skin. Construction of German gas chambers also provided work for someone – this is not a moral or sound reason for allowing suffering. If you can, please boycott Canadian goods. It WILL make a difference. As things stand, Canada has placed itself alongside China as the cruelest and most self-serving nation.”

Previous Post: « Gay Priest Forgives Man Who Beat Him
Next Post: And You Thought Stretch Hummers Were Obnoxious »