Rudy Giuliani distancing himself from pro-gay past as election nears… 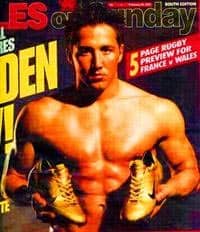 Bonfire of the Vanity: Charlotte Church fired off a salvo at Pink after the “Stupid Girls” singer expressed her disbelief at the vanity of Church’s boyfriend, Welsh rugby glamazon Gavin Henson. After meeting Henson, Pink told the press: “I met Charlotte Church’s boyfriend Gavin Henson when on the Jonathon Ross show (British chat show). I was sitting next to him and he pointed to the cameraman and was like, ‘Hey you, why don’t you point that camera at me and put it on the screen so I can see how good I look?’ I’ve never heard a guy say that. That was the first thing I heard him say. I thought, ‘Who is that dude?'” Said Church recently: “[Pink]’s desperate for PR, what with her new album. I think she said it because Gav turned down an offer to be in her next video. We were stunned because after the show, she posed for pictures with him and gave him loads of her CDs. Why do that if she didn’t like him?”

Can we get together? Some fear Madonna may create “a logjam of humanity” at electronica tent when she appears this month at Coachella Music Festival.

Doctored photos of Minnesota Senators thumbing their noses at the camera are being used by supporters of an amendment that would ban gay marriage in that state. The targeted Senators, who voted against the amendment in committee, think the group’s tactics may work against them. Senator John Marty: “It’s a cheap shot. It’s juvenile. To me it’s what a 6th-grader would do to ridicule someone they don’t like.”

Previous Post: « Supporters Rally Behind Kentucky Student
Next Post: King & King: Once Upon a Time in Massachusetts »