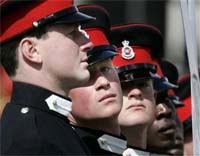 Prince Harry graduates from Sandhurst; may serve in a conflict zone in Iraq.

The Massachusetts legislature picked up the debate on gay marriage again yesterday, discussing a proposed ban on same-sex marriage that opponents are trying to get on the 2008 ballot. Governor Mitt Romney sent a letter to the committee which reiterated his feelings on the topic: ”The importance of marriage between mothers and fathers, wives and husbands is so great that we must take whatever action is needed to preserve it, for the sake of our children and our children’s children.”

College reunions, rock stars based on Elton John, a gay US District Attorney, and a bunch of gay men married to women. AfterElton looks at the gay content you might see on the networks next fall.