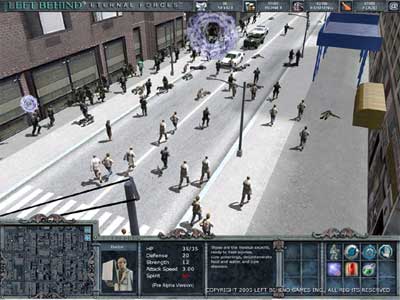 Look at what the wingnuts hijacking Christianity have created now. Left Behind: Eternal Forces is a real-time strategy game whose creators have ties to Rick Warren, author of The Purpose Driven Life. The game as described by Jonathan Hutson of Talk2Action:

“Imagine: you are a foot soldier in a paramilitary group whose purpose is to remake America as a Christian theocracy, and establish its worldly vision of the dominion of Christ over all aspects of life. You are issued high-tech military weaponry, and instructed to engage the infidel on the streets of New York City. You are on a mission – both a religious mission and a military mission — to convert or kill Catholics, Jews, Muslims, Buddhists, gays, and anyone who advocates the separation of church and state – especially moderate, mainstream Christians. Your mission is ‘to conduct physical and spiritual warfare’; all who resist must be taken out with extreme prejudice. You have never felt so powerful, so driven by a purpose: you are 13 years old. You are playing a real-time strategy video game whose creators are linked to the empire of mega-church pastor Rick Warren, best selling author of The Purpose Driven Life.”