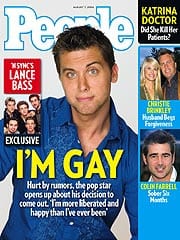 Yes, the rumors are true. Lance Bass has come out of the closet in the latest issue of People:

Having pursued acting, producing and – most memorably – space flight after ’N Sync went on hiatus in 2002, Bass now is looking ahead to new beginnings. He is in a “very stable” relationship with model-actor-Amazing Race winner Reichen Lehmkuhl, 32, and is developing an Odd Couple-inspired sitcom pilot with Fatone in which his character will be gay.

Mostly, though, he’s just enjoying the relief that comes with the culmination of a long, at times emotionally fraught journey.

“The thing is, I’m not ashamed – that’s the one thing I want to say,” he explains of his decision to come out. “I don’t think it’s wrong, I’m not devastated going through this. I’m more liberated and happy than I’ve been my whole life. I’m just happy.”

As for why he’s talking about this now Bass says, “The main reason I wanted to speak my mind was that (the rumors) really were starting to affect my daily life. Now it feels like it’s on my terms. I’m at peace with my family, my friends, myself and God so there’s really nothing else that I worry about.”

Good for Lance. It’s very easy to say ‘you should have done it sooner’ but I applaud him for finally making this decision. The issue hits newsstands Friday…