Tyron Garner, one of the plaintiffs in the historic Lawrence and Garner vs. Texas which struck down sodomy laws in 13 states where it was criminalized, has died, Lambda Legal reports. 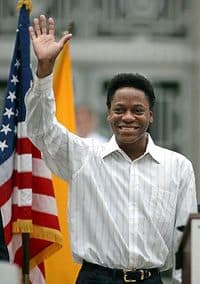 In a statement, Lambda’s Executive Director Kevin Cathcart said, “We extend our heartfelt condolences to Tyron’s family and friends and we join them in mourning his passing. Because Tyrone Garner and John Lawrence had the courage to challenge homophobic sodomy laws, the U.S. Supreme Court recognized that love, sexuality and family play the same role in gay people’s lives as they do for everyone else. That’s a colossal legacy and one for which his community will forever be thankful.”

Garner and his partner John Lawrence, were arrested in 1998 for having sex in Lawrence’s home after authorities discovered them while responding to a false report that an armed man was inside the home.