Despite the sad news of Congressman Gerry Studds’ death, it was exciting to see his “husband” Dean Hara referred to in mainstream news publications across the nation. For the first time, a government official’s same-sex spouse was not referred to as partner, boyfriend, longtime companion, or friend. 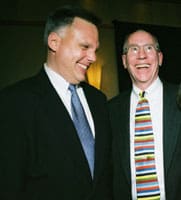 But the federal laws have yet to catch up with the laws of Massachusetts, and Studds’ death has forced into the open the inequality gay couples face when it comes to marriage benefits. Partnered for 15 years, and married when they were able in 2004, Hara deserves the benefits offered to spouses of other deceased lawmakers, who collect more than half of the pensions earned by their spouses:

“When Studds, 69, died from a vascular illness Saturday, he was receiving an estimated annual pension of $114,337, according to the National Taxpayers Union, which studies federal pensions. Studds was first elected to Congress in 1972 and served until 1997. His district represented Cape Cod and the Islands, New Bedford and the South Shore.

If Hara were a woman and married to Studds — rather than a same-sex spouse — he would receive $62,000 a year from Studds’ pension program under the congressional retirement system, according to NTU guidelines.”

The discrimination is glaring.

And the truly sick part of it is that pension benefits are still offered to congressmen convicted of felonies! Like Bob Ney, who faces up to 10 years in prison for his part in the Abramoff influence-peddling scandal. Ney will still receive $29,000 a year in federal pension for the rest of his life.

Studds’ husband will receive nothing. The federal law, defined by the Defense of Marriage Act, signed by Bill Clinton in 1996, trumps all state laws regarding benefits to same-sex spouses. Said Gary Buseck, legal director of Gay & Lesbian Advocates & Defenders: “We’d been hoping at some point Congress would address the inequities” in the law. There are plenty of people being impacted. But this is the first time right in the congressional family a distinguished member is being treated differently than other members.”

You may have missed…
Former Massachusetts Rep. Gerry Studds Dies at 69: Was First Openly Gay Person Elected to Congress [tr]