Mozambique plans to launch gay rights movement: “If the Ministry of Justice says it’s unconstitutional, then we’ll ask them to show us where such associations are banned in the constitution.” 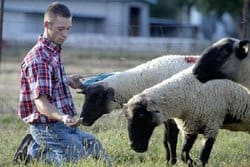 Sacramento’s Grant Ermis not your typical Mr. Gay, he says: “A typical schedule for Ermis might have him up at 6:30 a.m. tending the farm’s flock of about 160 sheep before heading to campus for classes, and then to another job at a local harvesting company. Ermis doesn’t want to feed into the fact that there is a stereotype, but said his days as the manager of breeding and genetics at the farm’s sheep unit are filled with tasks that the general public probably wouldn’t associate with a gay man.”

How Friendster missed the boat. At one point, Friendster’s founder Jonathan Abrams was offered $30 million by Google for the at-the-time leading social networking service, but turned it down to wait for a higher offer that never came: “Many people working at Friendster sneered at MySpace. The holy grail at Friendster — and the cause of most of its technical problems — was its closed system: users at Friendster could view only the profiles of those on a relatively short chain of acquaintances. By contrast, MySpace was open, and therefore much simpler from a technological standpoint; anybody could look at anyone else’s profile.”

Gay ex-cop in Monrovia, California files suit claiming he was harassed and then fired because of his sexual orientation. Mike Solarez: “After I got outed by the chief, my career was a target. I was a target for them. Everything I did was a target.”

The Devil Wears Prada being developed for TV. I’ll take Ugly Betty, thanks…

Steve Jobs doesn’t expect the iPod to be hurt by Microsoft’s Zune because its wireless capabilities are lacking: “It takes forever.”

The Catholic Church in Scotland is upset that a gay group has been put in charge of anti-bullying programs in schools there. Director of the Scottish Catholic Education Service: “It is a little disturbing that LGBT Scotland has been asked to do some of this work because its research, also funded by the executive, recommended discussing issues of homophobia in primary school which we feel is inappropriate and not what parents want. It seems strange when there is so much other bullying, such as that prompted by racism, that this group has been given another opportunity to promote its own particular interests.”