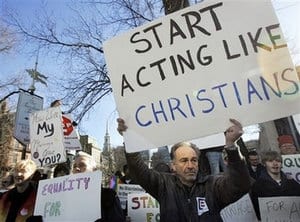 Massachusetts Governor-Elect Deval Patrick says he was surprised by the quick vote on the proposed amendment to ban gay marriage and hadn’t heard about the Supreme Judicial Court’s advice to the legislature that they should vote on the measure:

“I learned about the SJC’s decision the day before I came up here, because I had been out of the country until then. There was a strategy in place when I left the country. That strategy changed while I was away, and I did what I could before I had any power to influence these outcomes. That changes tomorrow….This fight isn’t over.”

Governor Mitt Romney called the vote a “huge victory for the people of Massachusetts” (except for, of course, the 8,000 same-sex couples who have married): “In a democracy, the voice of the people is sovereign. I congratulate the Legislature and its leadership for upholding the Constitution and the rule of law.”

Massachusetts lawmakers will be asked to vote again in the next session, but the body of the legislature will have changed: “A total of 17 lawmakers who voted Tuesday won’t be returning in the new session, including some of the most vocal opponents of same-sex marriage. Gay marriage supporters say the new members will give them a net gain of seven opponents to the proposed amendment in the upcoming session.”