Justin “Tyme” Pascullo, a disc jockey in Amarillo, was fired from his job at KBZD Energy 99.7 for “inappropriate” content on a MySpace page considered “inconsistent” with the station’s policies. 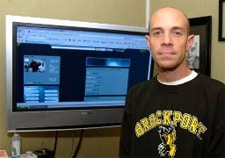 According to Pascullo, the content in question was “a line on his MySpace profile, in which he said who he sleeps with shouldn’t be any concern to anyone.”

Tejas broadcasting CFO Derrick Varnell, responding to alleged statements by the company’s chief officer saying Pascullo’s site “promoted homosexuality”, told the Amarillo Globe: “We felt he was a threat to our reputation (in Amarillo) and a threat to the society as a whole by publishing such things on Web sites that are associated with us…The content of some of those blog entries of Justin, on those Web sites, entailed sexual solicitations. Those are inappropriate, inconsistent with what we allow through our company policy and he was terminated because of that.”

Amarillo attorney Vicki Wilmarth seemed to suggest that the radio station had a decent case against Pascullo as “(Employers) have a right to look on the Internet just like anyone else” and “They are not breaking any law by discriminating against somebody on the basis of their homosexuality.”