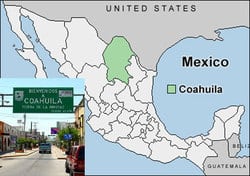 By a vote of 20-13, legislators in the Mexican state of Coahuila, which borders Texas, yesterday passed the most progressive same-sex union law in that country, one that goes further, according to Reuters, than one passed by lawmakers in Mexico City in November.

Said gay rights activist Silvia Solis: “It is more like a civil marriage.” Among other benefits, the law “would grant social security benefits to both members of a homosexual union.”

Coahuila, Mexico’s third largest state with a population of 2.3 million, once formed a territory with Texas to its north, before Texas seceded to become the Republic of Texas (and then later part of the United States).

When Mexico City passed its same-sex union law in November, openly gay congressman David Sanchez said, “These reforms are going to cause a snowball effect that no one will be able to stop.” Coahuila, which had its same-sex union bill in the works at the time, is the first state to follow suit.