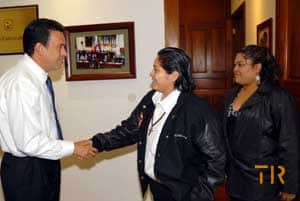 Mexico registered its first civil union since the northern state of Coahuila legalized them on January 11th. The ceremony took place in the city of Saltillo, according to the Associated Press:

“The couple, Karina Almaguer and Karla Lopez, traveled to Saltillo from their home state of Tamaulipas to register as a ‘civil solidarity union’ under a newly passed law that made Coahuila the first of Mexico’s 31 states to grant recognition to such unions.”

Official witness to the union was Coahuila State Assemblywoman Julieta Lopez Fuentes. Said Fuentes: “The object of this law is that unions of people of the same sex be legally regulated and recognized, so that they can have some security in their future.”

Mexico City legalized civil unions last November, but the law does not go into effect until the middle of March.

Best wishes to the happy couple.